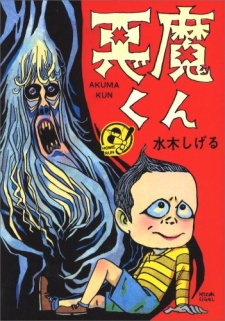 Akuma-kun (悪魔くん Akuma-kun) is a manga series created in 1963 by the creator of GeGeGe no Kitaro, Shigeru Mizuki. It has seen several manga remakes, reboots, and spin-offs and was adapted to a live-action tokusatsu series, an anime series, and movies.

Akuma-kun was adapted into a live-action tokusatsu series by Toei Company. It aired from October 6, 1966 to March 30, 1967 on NET (TV Asahi), almost two years before the 1968 anime of GeGeGe no Kitaro. Akuma-kun's name is Shingo Yamada, who is portrayed by Mitsunobu Kaneko of Giant Robo (named Johnny Sokko and his Flying Robot for its English dub) fame.

Akuma-kun was adapted into a live action TV movie by Toei Company, three years before the anime. It aired on September 15, 1986 as part of Fuji TV's Monday Drama Land, which also previously aired a TV movie adaptation of GeGeGe no Kitaro. Akuma-kun's name is Shingo Ito.

Shingo (and Kappa no Sanpei's Sanpei) at Mizuki Road's Kappa Spring
Add a photo to this gallery
Retrieved from "https://gegegenokitaro.fandom.com/wiki/Akuma-kun?oldid=58241"
Community content is available under CC-BY-SA unless otherwise noted.