Bake-Bi appears as a large ball of yellow flames that floats several feet above the ground. Within the flames is what appears to be three skulls, the foremost one being the lowest, one behind and above to the right side and the last is at the very back to the left and above the other two.

Bake-Bi appears in episode #15 of the third anime adaption, Frozen Yōkai: Yukinko. In this episode, Medama-Oyaji asks for Bake-Bi's help to stand a chance against the trio of Yukinko, Yuki-Onna and Yuki-Otoko, who had also frozen Kitarō. He willingly agrees to help, saying he can't say refuse a request coming from Medama-Oyaji. He melts the ice trapping Kitarō, and the three ice yōkai are eventually melted. As they leave the cave they were inhabiting, the melted ice yōkai combine to form a singular ice creature that tackles Kitarō. Upon Medama-Oyaji's request, Bake-Bi enters Kitarō, as he says Kitarō can endure the heat. The ice creature composed of the ice yōkai evaporates from the heat and is finally defeated.[1]

He also makes appearances in episode 35, where he is a part of the Flame Yōkai Five (炎の妖怪五人衆) along with Tsurube-Bi, Ubaga-Bi, Kurage-no-Hinotama, and Tenka.[2] His other known appearance is in episode 98.[3]

At some point Bake-Bi was confronted by Rei Isurugi, who eventually killed and absorbed his soul.[4]

Bake-Bi of legend is said to emerge from the lake's shore on the cloudy or light rainy seasons, drifting in the air of 4, 5 scale (about 1.2 - 1.5 m) in height from the ground. At first it is a small fire, but it increases in size as it moves, and it reaches the mountain's hand, it is about 3mm in diameter (about 0.9 m). It is said that the face of a fireball emerges from this fireball, and the upper body of two people are in a form of sumo wrestlers.

Another legend tells of a man who once thought to have uncover the identity of the fire. When he was waiting at the ridge of the rice, a Bake-Bi appeared. He was a master of sumo wrestling, while struggling with a loud voice, confronted the fiery fire, but on the contrary 5 or 6 (about 9 – 11 m) was also thrown away. The rice crop was fruit at the thrower, so the man did not hurt himself. However, everyone who started him, and who faced the Bake-Bi was thrown away as well, so finally the villagers finally became irrelevant to the fire. 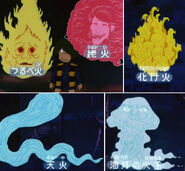 Bake-Bi and the other members of the Flame Yōkai Five along with Kitarō.
Add a photo to this gallery

Retrieved from "https://gegegenokitaro.fandom.com/wiki/Bake-Bi?oldid=67321"
Community content is available under CC-BY-SA unless otherwise noted.