GeGeGe no Kitarō Wiki
Register
Don't have an account?
Sign In
Advertisement
in: Article stubs, Characters, Females,
and 5 more
English

Buru-Buru (ぶるぶる Buru-Buru) or Okubyō-Gami (臆病神 Coward Spirit/God) is a frost yōkai who attacks whoever by freezing them within. The only way to rid the victim of her is to place them in a hot onsen.

Her true shape can not be seen by the naked eye, except with the help of special glasses. She obtains her appearance from the book "Konjaku Gazu Zoku Hyakki" by Toriyama Sekien.

Buru-Buru caused trouble for humans that pass on mountain roads, even leading to car crashes. Eventually she was sealed away in a scroll, where her scroll somehow ended up at a cabin.[1]

During a camping trip with Mana and her father, the boys were asked to get firewood. While collecting firewood, Sōma finds the scroll and decides to bring it with them. They start a campfire and after Mana protects Yūta from the brothers' teasing, he sees the scroll and opens it, revealing a drawing of Buru-Buru. Hiroto snatches it and takes a look, calling it gross he throws it into the fire. As it burns Buru-Buru is free and flies out to the forest. At the parking lot she passes by Yūichi to give him chills, enters his car causing frost to build up and appears on the windshield, frightening him and she freezes him as he tries to escape. Soon after the brothers come to check on him, she gives Hiroto chills and grabs Sōma's leg before she gives him chills as well, causing them to run off. She follows and catches them before they could reach the camp. Alerted by her laugh, Mana sends a text to Neko-Musume but is kidnapped by the frost yōkai. Later she attempts to kidnap Yūta but is foiled and a brief battle ensues between her and Neko-Musume. She turns invisible before Kitarō's getas could get her, but is fastened with Kitarō's Hair Needles to a tree, keeping her in place. However she is soon freed by Nezumi-Otoko in an attempt to make money but she momentarily enters his mouth to freeze him before leaving. On the mountainside road Buru-Buru enters and freezes the inside of Mr. Inuyama's car and breaks the windshield exiting it with Mana in her grasp. Angered by Yūta's remark about her she throws Mana and enters Yūta's body to freeze him to death. Kitarō then brings Yūta to the nearby hot springs to expel her. At first she manages to freeze the spring water, but they add more hot water, unable to bear this heat she exits Yūta's body and is caught Kitarō's Chanchanko. After this ordeal, she is presumably sealed away again.[1]

Buru-Buru is a yōkai that is also known as a spirit of cowardice that causes the shivers by grabbing the scruff of the victim's neck.

Buruburu as she appeared in the 1968 anime 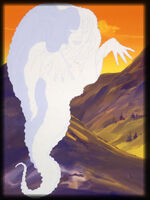 Buruburu appeared in the 1985 anime 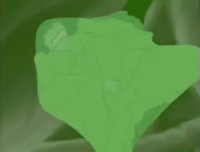 Inside Nezumi-Otoko's stomach in episode #90 of the 1996 series 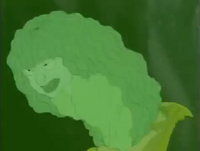 Buruburu as she appeared in the 1996 anime 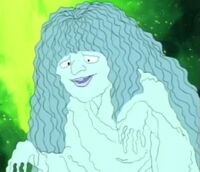