GeGeGe no Kitarō Wiki
Register
Don't have an account?
Sign In
Advertisement
in: Article stubs, Characters, Males,
and 2 more

Chōchin-Obake is a lantern. He is often depicted with a long tongue.

In the fourth anime, Chōchin-Obake's appearance is a large white paper lantern with a black top. His eyes have dark grey sclerae, with small yellow irises and black pupils, with red rings around them. His mouth stretches around his body with a red tongue inside, above them are small black nostrils.[1]

Within the sixth anime, the Chōchin-Obake's appearance are small, round red paper lanterns with a black top. They have black rings around their eyes which have white sclerae and small black pupils. Their mouth stretches around their body with a pink tongue inside it, above their mouths are small black nostrils.[2] There are also white colored ones as well.[3]

He appears in the first opening of the 2nd anime adaptation.

He appears in the first opening of the 3rd anime adaptation.

He appears in the first opening of the 5th anime adaptation. Chōchin-Obake also appears in episode #63, Japanese Yōkai Annihilated!? Fabric Yōkai!! In this episode, he was residing in the Tōkai region.

Episode 28: Three Chōchin-Obake appear along with several other yōkai of the GeGeGe Forest to help Kitarō fight off the Western Yōkai. They witness as a fire breaks out around the forest. Later one is seen being chased by one of Carmilla's bats and caught in an explosion caused by Backbeard.[2]

Episode 35: One is seen in the crowd of yōkai gathered around the GeGeGe House, trying to drive Agnès out of the forest. They listen to Medama-Oyaji's warning that if they drive her out then the tragedy Malay yōkai will repeat somewhere else. Soon followed by Kitarō as he explains how grave the consequences are if Japan becomes a part of Backbeard's empire, causing them to look at one another. Until their attention is drawn to Kitarō as he stands on his resolve to fight.[4]

Two appear as part of the group of yōkai preparing to fight the humans.[3]

In Japanese folklore, Chōchin-Obake is a lantern inhabited by ghosts. It is home for the ghosts of people who died with hate in their hearts; for this reason, they are doomed to haunt the earth for all time. If someone should light one of these haunted lanterns, it is thought that a hateful ghost may leap out of it and attack.

Chōchin-Obake in the 1971 anime opening.

Chōchin-Obake in the 1985 anime opening. 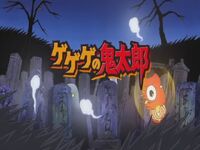 Chōchin-Obake in the 2007 anime opening.