Dodomeki is a yōkai with a reptilian appearance, having medium length brown hair, a pair of small red eyes, a large mouth and long neck. Her body is covered with a multitude of eyes with gray irises, the only parts that are not covered are the hands, feet, neck and head.

As Hitomi, she appears as a girl of average height with medium-length strawberry blonde hair, red eyes and fair skin. She wears a white collared long sleeves, that is rolled up to her elbows, a light yellow sweater vest, blue skirt, navy blue socks and brown shoes.

Dodomeki lived a life of thievery. Even as she was about to throw Kitarō into a cement pit, he told Dodomeki she should run away from Nurarihyon as she would be able to change, and she did. She left Nurarihyon and risked her life to protect Kitarō.

Dodomeki appears in the eighth episode of the fifth anime adaptation, An Old Adversary! Nurarihyon.

She appears again in episode #47, The Great Yōkai Trial, during the Trial after her spirit had been called to defend Kitarō.

Shapeshifting: Dodomeki is able to change her appearance, such as a human. 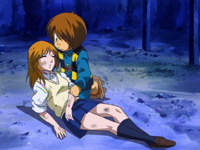 Dodomeki (Hitomi) and Kitarō in the 2007 anime.

Dodomeki (Hitomi) defending Kitarō during the Great Yokai Trial in the 2007 anime. 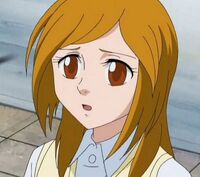