The Return of the Great
Yōkai Gasha-Dokuro (1985)

Gasha-Dokuro's appearance is that of a giant human skeleton, with several teeth missing, the inside of his skull is usually blackened. Because of his sheer size, only from the spinal cord and above is ever seen. Within the fifth anime, he has a red eye with a yellow pupil in his left eye socket.

Gasha-Dokuro considers humans food and it is only natural to eat what is inside his body. Once angered, he will not stop until he has drained the life force of his victims, even going after other Yōkai. After being defeated though, he is impressed by Kitarō, accepting his loss and peacefully chooses to rest once more.[1]

Gasha-Dokuro first appears in the first chapter of Saishinban GeGeGe no Kitarō, The Return of the Great Yōkai Gasha-Dokuro. He was born from the regret of the suicide victims of the Aokigahara Forest. Kitarō had defeated him once before, but when Kenta Yamada unknowingly urinated on one of his bones, his spirit cursed Yamada to be bullied until he attempted suicide. Once Shisa discovered he was behind the curse, Gasha-Dokuro revived himself and attacked the town nearby. He was defeated when Yamada and the Kitarō Family blocked his path, allowing Kitarō to bind his movement with the Yōkai Rope and burn him to ashes with Tsurube-Bi and gasoline from the Yōkai Car.[2]

In the Shinpen GeGeGe no Kitarō chapter Sekiyō, the hot spring inn Nezumi-Otoko and Sekiyō honeymoon at is called Gasha-Dokuro Hot Springs,[3] but Gasha-Dokuro himself does not appear in the series. In the sixth anime adaptation of the story, the inn is instead called Honekawa Hot Springs.[4]

In GeGeGe no Kitarō: Kitarō Jigoku-hen, his energy source, the Cursed Pot, is stolen by Dracula and the Wolfman. After they were defeated by Kitarō, Gasha-Dokuro appears and captures them, able to travel to and from Jigoku at will. After grabbing Dracula and Wolfman, he returns to underground with them.[5]

In 1683, Gasha-Dokuro is summoned by Hone-Onna, who orders him to eat the malice-filled souls to grow more ferocious. After several days, Hone-Onna is dispatched by Kitarō and orders Gasha-Dokuro to demolish the city of Edo. He goes on a rampage, crushing several houses as he goes. Soon he faces against Nurikabe, where he manages to bite a piece of his head off. However he is quickly sealed within Nurikabe's body, ending the fight.[6]

He appears in episode #71 of the third anime adaption, Gasha-Dokuro of Yōka Forest.

He appears in the fourth movie based on the third anime adaption, GeGeGe no Kitarō: Gekitotsu!! Ijigen Yōkai no Dai-Hanran!!.

He appears in episode #11 of the fourth anime adaption, Keukegen and Gasha-Dokuro. He was controlled both times when he appeared.

Gasha-Dokuro rested in what was an execution site in the Edo Period, before Nezu Mitsuo demolished the shrine and built his office over it. He awakens sometime before Nezumi-Otoko is given the position of vice president by Nezu Mitsuo. One night he attacks five workers, including Nezumi-Otoko's assistant when she enters an elevator, leaving her as a husk as it reached the ground floor. The next night he meets Nezumi-Otoko, who tries to persuade him to not eat the people working there. He dismisses this, as the building is inside his stomach, and it is only natural to eat what is inside of it. He then opens the doors to show the rat Yōkai that he is eating the president as they speak. He sends long finger bones to pull Nezumi-Otoko in, deciding to eat him as well, but Kitarō's getas break them. He sends skeletal hands to attack the Yōkai boy, but Kitarō swiftly shatters them. Sending more hands after them as they head up the stairs, but they too are shattered by his Hair Needles. They reach the roof and he reveals himself and tries to crush Kitarō. The Yōkai boy uses his geta to hit him in the face, he falls back but sends out four skeletal hands to absorb his life force eat him. Just as he goes after the others, his head shakes and a hole forms from his skull where those he has eaten fall out. Without them his body will not last long and is defeated by Kitarō with his Hair Spear, shattering to pieces. He listens to Kitarō explain how he defeated him by hiding his soul in his Chanchanko and controlling his geta to shatter his skull from within. He comments that he is that famous descendant of the Ghost Tribe and remarks his immortality. Kitarō asks him to sleep once more, he agrees and the souls of those he ate return to them. The following day a memorial monument is made by the building.[1]

In the live action film GeGeGe no Kitarō: Sennen Noroi Uta, Gasha-Dokuro was born from the resentment of the souls of countless disgraced samurai gathering together over the centuries since the fall of the Genji. He was to rest under the forest for a long time, but Nurarihyon revived him in order to wipe out humanity. After Nure-Onna is added to him, Gasha-Dokuro goes on a rampage and even knocks Nurarihyon off into the distance. He is defeated when Kitarō and Kaede's thoughts are able to reach one another.[7]

Gasha-Dokuro appears in the eighth episode of the sixth anime adaption, Menace! Kagami-Jijii's Plot. During a class trip to an old folks home, Sōma and his friend Arimoto were playing with brooms instead of helping the others clean. Irritated, Mana chases after them until Sōma trips over his tombstone, he places it back to its original position and assures the two that no ones would notice. This however causes the Gasha-Dokuro to awaken and seek them out in anger. He finds Sōma and Arimoto together at night, leaving them in a catatonic state. He finds Mana later and starts disrupting objects around her until he corners her into her room, but Kagami-Jijii pulls her into the mirror. This does not stop him from seeking Mana, and somehow follows them in the Mirror World. He finds Mana and shoots a red eye beam, but Kitarō stops it and he and Neko-Musume clashes with him. He shoots another beam, but Kagami-Jijii arrives and reflects the blast back to him, passing through his skull. This leaves him weakened enough for Kitarō to finish him off, shattering into pieces.[8]

Eye Beams: Gasha-Dokuro is capable of projecting red beams out of his left eye.[8]

Area Manipulation: In the fifth anime, Gasha-Dokuro can manipulate his surroundings, such as the building that was built over the execution site, which is inside his body. He can lengthen hallways, darken the building's atmosphere, such as the windows of an elevator and the surrounding atmosphere and changing the appearance of the interior of the elevator lift.[1] In the sixth anime, Gasha-Dokuro is able to slightly manipulate the area around him, causing disturbances such as water faucets turning on and objects falling off around Mana as he chases her. He is also able to change the surrounding of Mana's room, when she was entering through the ceiling the space behind him was green and after he left it went back to normal. Gasha-Dokuro was also able to enter the Mirror World to follow Mana.[8]

Bone Manipulation: Gasha-Dokruo can create additional skeletal arms to catch his targets. He is capable of sprouting skeletal hands from the walls of the building.[1]

Energy Absorption: He can absorb people's life energy, leaving them as withered husks.[1]

Enhanced Durability: His body's exterior is noted by Kitarō to be hard enough to withstand his Hair Needles.[1]

In Japanese folklore, Gasha-Dokuro (がしゃどくろ), or Ōdokuro (大どくろ Ōdokuro, lit. Giant Skull), are giant skeletons, often fifteen times taller than an average person. If a Gasha-Dokuro sees a human, it will grab it and bite its head off if it does not flee quickly. Gasha-Dokuro are created from gathering bones from people who have died of starvation. The only way a Gasha-Dokuro can be detected before it appears is by hearing a ringing sound in one's ears.

Gasha-Dokuro in the third anime version 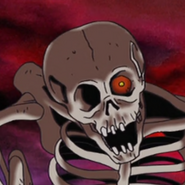 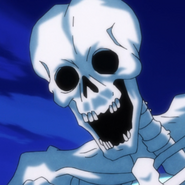 Retrieved from "https://gegegenokitaro.fandom.com/wiki/Gasha-Dokuro?oldid=63205"
Community content is available under CC-BY-SA unless otherwise noted.