GeGeGe no Kitarō Wiki
Register
Don't have an account?
Sign In
Advertisement
in: Article stubs, Characters, Males,
and 10 more

As a demon king, he has authority over demons and monsters in the region.

He is a noble ruler and is a polite and humble individual, and he can bow to apologize and thank to benefactors. He deeply cares for Genieya, but had difficulties in handling his daughter largely due to her nature. While he often scolds Genieya, he went rampage on Kitarō by hearing Genieya's claim that all she did was for the sake of the demon king but Kitarō troubles and bullies her. He instantly stopped attacking and showed respect to Kitarō as the latter saved Genieya, and spoke with an honorific manner, adding an honorific title to Kitarō.

Because he dislikes war, his violent minions who are fond of manipulating and triggering human wars are under his control. When he had a health issue, those demons and monsters went wild and caused havoc once again which his daughter described as their "playful pranks".

After becoming calm, the demon king soon recognized Kitarō and noted that he is famous overseas as well.

He appeared in the Witch Genieya.

As Genieya stole her father's spirit tobacco and traveled to Japan, he tracked her to the nation. Seeing his daughter fighting against Kitarō, he asked Genieya about the situation and she made up the story, he thought Kitarō was an enemy and attacked him, but his own beam was reflected on the windows of a building to him, resulting in his own loss. Later, he was cured at the Yōkai Hospital on Mount Osore and backed to the home with his daughter.

In the the third anime, he appeared in the episode 102 Tomboy Witch Genieya.

There was a plague in his kingdom, and he became seriously ill. Genieya deeply concerned and traveled to Japan to bring good doctors from the Yōkai Hospital. She stole a magical ring to summon a servant spirit.

He then noticed his daughter and the ring missing and came to Japan. As Genieya told him that Kitarō bullies her and prevents her from what she was doing for her father, the demon king was enraged and attacked Kitarō, however, his own attack caused Genieya to be shocked on an electric wire and fell off, however, Kitarō saved her and the king calmed.

Later, he apologized to Japanese Yōkai and made his daughter apologize and bow, and was prescribed medicine at the Yōkai Hospital.

Even when he was seriously ill, he could travel from Arabia to Japan alone and overwhelmed Kitarō in a fight.

Mouth beam: In the manga, he can shoot beams from his mouth, and this attack is powerful enough to melt his own body.

Magical beam: He launches magical lightning into the sky and casts several powerful energy beams which can merge into a single beam, and pursue the target at will.

Electrical Immunity: He is also immune to electricity. 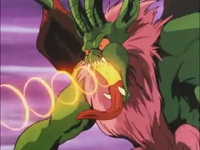 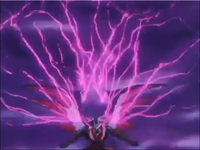 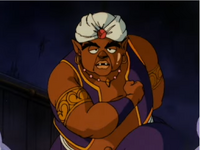 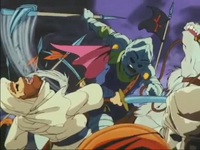 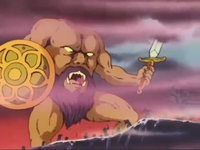 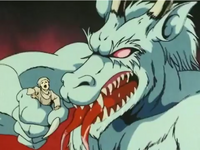 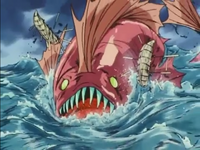 His appearance seems to be based on the Baphomet, a demonic image used in occult and historical references.