Series 1 Episode 4 (1968)
Geta (下駄 Geta) are a type of wooden sandal worn in Japan, notable for the two lifts on the bottom of them. A pair of Remote Control Geta (リモコン下駄 Rimokon Geta) are an iconic part of Kitarō's wardrobe as well as one of his most famous weapons. As the name implies, they can be controlled by Kitarō's thoughts.

Kitarō usually kicks them off of his feet to send them flying like boomerangs at enemy yōkai. He will also wear them on his hands to use them for blocking attacks or striking foes (this was most prominently done in the 5th anime). Even without Kitarō's power behind them, they still appear to quite powerful. They have a variety of special uses, such as being unaffected by Tsuchinoko's acidic poison[1] and allowing Kitarō to walk across the rainbow bridge into Makura-Gaeshi's dream world (Makura-Gaeshi). They can also stick to anything, allowing him to walk on walls and ceilings. One special attack they can perform is the Geta Tornado, where both geta swirl around before attacking. Like the chanchanko, they appear to also have a will of their own and will help Kitarō without him controlling them. There appears to be a "geta language" which, at the very least, Medama-Oyaji can speak, though sometimes Kitarō seems to understand it as well.

They can lose their powers if the thong on either or both geta is broken, but merely fixing the thongs will put them back to normal (2nd series, Ep. 19).[2] Bake-Zōri was able to control the geta and make them attack Kitarō, but he was able to defeat them by capturing them with the chanchanko and breaking the thongs.[3]

In Shinigami Tai-Senki, Kitarō covered the geta in poisonous sludge and threw them into Lucifer's mouth to defeat him.

While geta are depicted as items, other than being used by spirits of ancestors, it has been occasionally noted to have its own personality[3] along with Chanchanko. 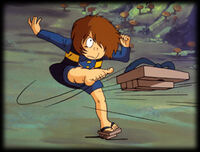 Kitarō using his geta in the 1985 anime.

Kitarōs 1 through 5 using their geta in the short at the beginning of the movie, GeGeGe no Kitarō: Nippon Bakuretsu!! 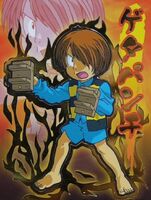