Han-Gyojin (半魚人 Han-Gyojin, lit. half merman or merman) is a water yōkai and antagonist of Kitarō.

In the second anime, Han-Gyojin is a yōkai that is half-fish half-human, thus having features of both, being covered in purple scales with a few barnacles that are visible and magenta webbed feet. His human features include a human-like build with a fit physique, arms and legs, each having five digits, and facial features such as ears and a nose. His head has light purple skin, long black hair that reaches his waist, eyes with white sclerae and small black pupils and a mouth with sharp teeth.

Within the third anime, Han-Gyojin appears relatively the same, though appearing to be shorter and having a stout physique. He has light indigo scales, webbed feet, white claws, light purple skin with whiskers on the sides of his face and long purple hair that reaches his knees. His eyes are white with small black pupils and his mouth is filled with more teeth.

In the fourth anime, Han-Gyojin's appearance is relatively the same, appearing to be shorter than Nurarihyon and having an average physique. He has green scales and skin with a few dull brown barnacles that are visible, webbed hands and feet, long light purple hair that reaches his legs and four pairs of whiskers on his face. His eyes have yellow sclerae with small black pupils and his mouth has sharp teeth.

There has been another type of Han-Gyojin which more resembles traditional images of merman in western cultures.

Han-Gyojin and Kitaro in the 1985 anime.

Han-Gyojin and Nurarihyon in the 1996 anime. 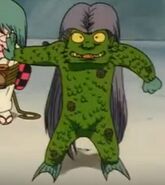 Han gyojin in the 1996 anime fullbody.

Han gyojin in the 1996 anime.
Add a photo to this gallery

Retrieved from "https://gegegenokitaro.fandom.com/wiki/Han-Gyojin?oldid=67390"
Community content is available under CC-BY-SA unless otherwise noted.