GeGeGe no Kitarō Wiki
Register
Don't have an account?
Sign In
Advertisement
in: Article stubs, Characters, Males,
and 9 more
English

Iyami (いやみ Iyami), also know as Eromodoki, is a Yōkai and antagonist of Kitarō. He first appeared in the Shonen Sunday story of the same name.

In the 1971 anime, Iyami appears a man with brown skin and a round bald head. His face has a hooked nose thin eyes with white sclerae and small black pupils, a slightly hooked nose, and a pencil-thin mustache that matches his skin. He wears a brown Sandogasa over a white veil, a white kimono that has several pink cherry blossoms with a long red obi tied around his waist.

Within the 1985 anime, Iyami appears as a man with pale white skin, a matching pencil-thin mustache, and a slightly hooked nose. His thin eyes have pink sclerae with tiny black pupils. He wears a brown Sandogasa over a linen-colored veil, a pink kimono with a dark pink cherry blossom pattern, and a light pink trim, a long hot pink obi is tied around his waist. Underneath his kimono is a red nagajuban, his footwear consists of a pair of tabi socks and straw sandals.

In the 1996 anime, Iyami's host is a man with pale skin, matching furry but thin, mustache and eyebrows, and a slightly hooked nose. His thin eyes have white sclerae with small black pupils. He wears a black Sandogasa with a red underside, over a yellow veil with a yellow cord tied under his chin. His kimono is colored light blue, with several pink cherry blossoms across it, a long obi is tied around his waist. Underneath his kimono is a red nagajuban, his footwear consists of a pair of straw sandals and tabi socks.

Within the 2018 anime, Iyami appears as a man with fair skin, an ovoid head, pointy ears, a slightly hooked nose, and a pencil-thin mustache and eyebrows that match his skin. His thin eyes have pale yellow sclerae with small pink pupils. He wears a tan Sandogasa over a transparent, pink veil, his kimono is colored green, with a fading pink cherry blossoms pattern around the base, a long yellow obi is tied around his waist. Underneath his kimono is a red nagajuban, while his footwear consists of a pair of tabi socks and straw sandals.

There are two types of Iyami in the series. More commonly appeared Iyami is a parasite-like yōkai with a single eye and a large head composing most of his body. This type of Iyami has his weak spot in its testicles.

Another Iyami drastically differs in appearance from above appeared in Yuki-Hime-chan and GeGeGe no Kitarō. This Iyami has a male like head and feminine body.

Both type of Iyami drastically differs in their weak points where the first one has his body as his true entity while the other has its head as its true entity.

In the 2018 anime, Iyami has a twisted sense of love, constantly trying to make others open themselves to love, which more often than and not differs significantly from true love, and more about embracing one's basic desires, often carnal, but not necessarily sexual in nature.

Iyami appears in episode 61 of the fourth anime adaptation, Beware of Yōkai Iyami.

Iyami appears in episode 72 of the Sixth anime adaptation, Iyami the Yōkai's Great Love Project. Iyami was asleep in his home in a forest until two lost travelers found and awakened him. Thinking there is not enough love in the world, he goes off using his mist to influence people, starting with Konaki-Jijii and Kitarō with his toxins, making them love-struck. Soon after Kitarō asks Neko-Musume on a date, he tries to flirt with multiple women he finds across.

When the Iyami's involvement is exposed, he intoxicates Nurikabe and Nezumi-Otoko. Although upset that Kitarō's feelings were fake, Neko-Musume with the console of Sunakake-Babaa musters the courage to keep fighting for Kitarō's real feelings. Decided on ending the facade, Neko-Musume pursues the Iyama and swiftly scratches his head repeatedly, prompting him to flee sending the hypnotized members of the Kitarō Family as the Iyami flees.

Neko-Musume is able to avoid them and pursue the Iyami into his forest, beheading him with a slash, which forces him to adopt his true form. A fight ensues and Neko-Musume gains the upper hand. When Kitarō appears, the Iyami gives him an extra dose of aphrodisiac trying to convince Neko-Musume to desist from defeating him, else lose Kitarō's love. Resolves to seek his true feelings rather than fake ones, Neko-Musume brushes Kitarō aside and delivers a swift and powerful kick into the Iyami's genitals, obliterating him, leaving his soul behind. With the Iyami defeated the spell is broken for good.

Iyami appeared in Yuki-Hime-chan and GeGeGe no Kitarō was regarded as invincible due to its pyrokinesis and energy transmission.

Tongue Lighter: Iyami has a tongue-shaped lighter in its mouth. Iyami can transmit any sort of mental energy by enemies especially their psychokinesis and anger. With this, Iyami can concuss his targets instantly.

Iroke/Shouki: Iyami can produce an aphrodisiac mist exuded from his mouth, that invades its target, intoxicating them into trying to actively seduce members of the opposite sex.

Human Possession: Iyami was able to take over a human's body, using it as if it were his own, even being able to apply his other powers.

Elasticity: Iyami is able to extend parts of his body, such as his arms and neck, to variable lengths.

True Form: He is able to assume his true, more monstrous form for combat. When doing so it typically tries to use brute force against his foes. 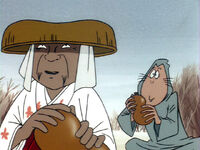 Iyami and Nezumi-Otoko in the 1971 anime. 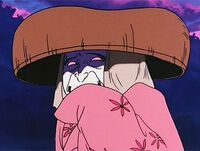 Iyami's full appearance in the 1985 anime. 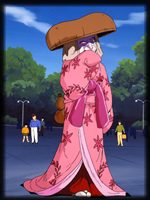 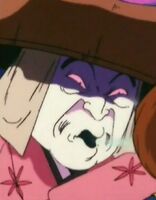 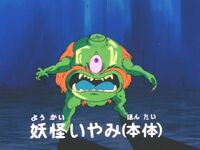 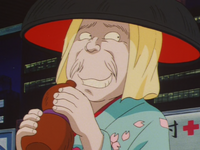 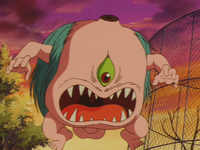 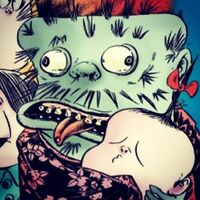 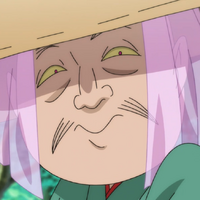 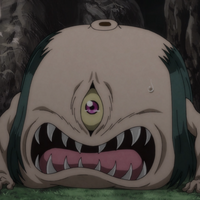 The Iyami, also known as Iyaya, appears during the night on roads with their back turned, giving them the appearance of a beautiful woman. If someone gains their attention, they turn to them to reveal that their face is of a wrinkled, old man.