GeGeGe no Kitarō Wiki
Register
Don't have an account?
Sign In
Advertisement
in: Article stubs, Kappa, Water Yōkai,
and 4 more

Most Kappas resemble anthropomorphic turtles, having green skin, shells on their back, and webbed hands and feet. They have plates on their head surrounded by hair, usually dark green. Some Kappa sub-species, such as Hyōsube, are more akin to monkeys and are quite hairy.

Within the 2018 anime, the Kappas of Tono Mountain resemble anthropomorphic turtles, having light green skin with light yellow patches on their stomach area and around their beak-like mouth, pointy ears, webbed hands but non-webbed feet. Their shells have a green and light green camouflage pattern, with light brown marginal scutes as its edges. On top of their heads are glossy light blue plates surrounded by green hair of varying lengths. Their only clothing consists of vests of varying colors, though some prefer not to wear a vest.[1]

Tarōmaru of the Kappas living in Tono Mountains came to GeGeGe Forest to collect Sunakake-Babaa's sand, in return he gives her some cucumbers he planted, explaining to Nezumi-Otoko that cucumbers that grew with her special sand taste better. Later at the Tono Mountains, other kappas are seen playing around in the water, as Jirōmaru and Tarōmaru share a cucumber to eat. They are later hired by a company boss as part of another one of Nezumi-Otoko's schemes. Although happy at first of their arrangements of having as many cucumbers they can eat, showers, and a sumo wrestling room, they begin to suspect something wrong. They realize that they are being exploited, and demand their boss for higher pay. However, he counters them as even if they quit, they won't get hired by others due to being kappas, forcing them to still work under him. In retaliation, they steal his shirikodama, and begin an uprising. They go throughout the city stealing people's shirikodama. Kitarō attempts to stop them but is easily dispatched as his shirikodama is stolen. The kappas also subdue both Nurikabe and Ittan-Momen and were close to stealing both Neko-Musume and Sunakake-Babaa's shirikodama, before Kitarō defeats them after being invigorated by Isogashi. Tarōmaru manages to escape to the company's building, facing off against Kitarō. However, Jirōmaru arrives giving Kitarō his shirikodama back and manages to convince Tarōmaru to give up and go back with him to the Tono Mountains, claiming that he does not care about having all the cucumbers they could eat, like the ones they share taste much better. Afterward, all the kappa return to the Tono Mountains, with Jirōmaru and Tarōmaru happily sharing a cucumber together.[1]

Underwater Breathing: As they are water-dwelling Yōkai, they are able to breathe underwater for prolonged periods of time.

Expert Swimmer: Kappas are experts at swimming as they live in lakes and rivers. A group of Kappas is capable of creating a whirlpool strong enough to allow the bottom of a lake to be shown.

Shirikodama Theft: Kappas are able to steal a person's shirikodama through their anus, leaving them lethargic and lazy. They are also able to give it back through the same method.[1] 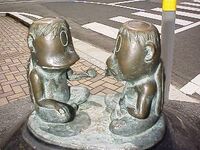 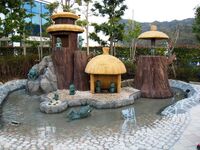 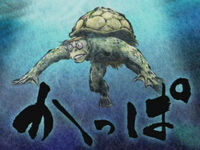