GeGeGe no Kitarō Wiki
Register
Don't have an account?
Sign In
Advertisement
in: Manga, Kappa no Sanpei, Yōkai manga
English

Kappa no Sanpei (河童の三平, Sanpei the Kappa) is a manga series by Shigeru Mizuki that has been adapted into a TV series and an animated film.

There is not one but many Kappa no Sanpei manga published in several different magazines. Each version has several differences from one another, but the consistent premise is the adventures of Sanpei Kawahara, a young boy who resembles a kappa. The differences between each series is listed below (see Manga). There was also a live action TV series and animated film, also described below (see TV series and Anime film).

Mizuki created the story after telling a relative's child stories about Kabō the Kappa. The original stories were made up as he told them, and don't seem to be the same story as in Sanpei.

Soon after, he made a kamishibai titled Kappa no Sanpei, and made roughly 80 stories about the character. However, Mizuki expressed regret with how it ended up. There ended up being so many kappa showing up in human society that the stories lost their down-to-Earth feel and it became difficult to advance the story. As a result, he never published the final story.

He later remade the series as a rental manga, but due to various circumstances at the publishing company he was forced to end the series after only eight books.

Sanpei Kawahara is a boy who goes to live with his grandfather in a mountain town. His mother lives in Tokyo working at a pachinko parlor in order to eventually send Sanpei to college. At school, Sanpei's classmates taunt him for looking like a kappa. While sleeping on a boat one day, a group of kappa find Sanpei and mistake him for one of their own and bring him back to Kappa Country. The kappa have a rule about killing any humans who wander into Kappa Country, but because Sanpei looks like one of them, they decide to make an exception and let him live. He is allowed to return home under the condition that he takes care of the Kappa Elder's son Kanpei, who is studying abroad in the human world.

After returning to the human world, a Shinigami arrives to take Sanpei's grandfather. Despite Sanpei's best efforts, Shinigami takes his grandfather, but his grandfather helps him come to terms with the situation. After his grandfather's death, Sanpei is reunited with his father, who had disappeared some time ago. He had been studying a dwindling society of dwarfs, but in order to protect the dwarfs he decided not to reveal their existence to the public and instead chose to live alone in the woods. Soon after, however, Shinigami returns and takes Sanpei's father as well, so Sanpei's father entrusts the dwarfs to him.

Despite both his father and grandfather dying, Sanpei's life never slows down. In addition to the Kanpei and the dwarfs, Sanpei also frequently deals with a mischievous Tanuki and the Shinigami.

Published by Togetsu-Shobō from 1961 to 1862 (8 volumes). Sanpei Kawahara, a boy who looks like a kappa, gets caught up in the Kappa Country. This series was one continuous story, starting with the Kappa Elder's son going to the human world to study abroad.

Published in 1966. A remake of the first couple of stories from the rental manga.

Published from 1968 to 1969. A remake of the rental manga, but with new stories added within.

Published from 1993 to 1994. In this colorized manga, Sanpei has gone missing, so a kappa poses as him in the human world. The kappa is never referred to by named, but he appears to be the same character as Kanpei from the Shonen Sunday version. 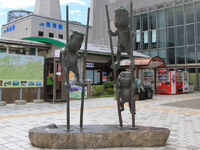