Kitarō (鬼太郎, Kitarō), also known as GeGeGe no Kitarō (ゲゲゲの鬼太郎), is a yōkai boy born in a cemetery after the death of his parents. Aside from his mostly-decayed father, Medama-Oyaji, he is the last surviving member of the Ghost Tribe. He fights for peace between humans and yōkai, which generally involves protecting the former from the wiles of the latter.

His father is Medama-Oyaji, and his mother was Iwako.

The original kamishibai that inspired Kitarō was first written around 1933 or 1935 by Masami Itō. Itō's story was based on local legends describing the same or similar stories.[1] Itō also noted that Kitarō was inspired by Japan's ghost stories such as Kosodate-Yūrei which was originally based on Chinese folklore from 12th to 13th Centuries.[2][3]

Because the original art has been lost since the war not much is remembered about the story. What is recalled is that it told the story of Kitarō(奇太郎) a horrid looking child (or snake-like child) being born out of a graveyard after his parents' deaths and seeking revenge on their enemies.

However, Kitarō's background in these stories is quite different from the Kitarō to come. In Serpent Man, Kitarō is a human born from the belly of snakes who seeks revenge on those who mistreated him as a child. In Karate Kitarō, he trains under a karate master named Gichin (modeled after real-life karate master Gichin Funakoshi) and eventually faces him in battle and defeats him.

Main article: The Birth of Kitarō

In 1960, Mizuki introduced Kitarō in the rental manga story The Ghost Family. It is here that Kitarō's official backstory is established. In The Ghost Family, Kitarō is a yōkai child born out of a graveyard after his mother dies.

Kitarō looks like a young boy. He has long brown hair that covers his left eye, and he wears a black and yellow striped chanchanko over a navy blue Showa-era school uniform. He also wears Japanese style wooden sandals, called geta. His school uniform was made out of the beard of a wizard and has lasted over 100 years. His undergarments consist of a shirt made out of a water nymph's robe and an oni loincloth Medama-Oyaji claims to have gotten from Momotarō. He is modeled after Mizuki's nephew when he was 3 or 5. His hair was light gray or sliver in the original manga, but from the 2nd anime on it is brown.

He is missing his left eye. The origin behind this varies depending on the story. In the Hakaba Kitarō manga, it is just assumed he bashed his eye while climbing out of the grave, but in the Hakaba Kitarō anime it is explained that after he emerged from the graveyard, a terrified Mizuki threw him away and ran, and the infant Kitarō hit his eye against the edge of the gravestone. In the rental manga, Kitarō is sometimes depicted missing his right eye instead. It was also common for Medama-Oyaji to rest in the empty socket and emerge from Kitarō's bangs, usually startling people. After the GeGeGe no Kitarō era began, whether or not Kitarō was missing an eye depended on the adaptation.

In the live-action films starring Eiji Wentz, Kitarō is 170 centimeters tall and wears a black shirt with black shorts reaching to his knees with silver hair like in the original manga. In the movie, similiar to Hakaba Kitarō, he has a Chanchanko with 3 yellow stripes instead of the 2 yellow stripes of later and earlier versions, both his eyes are intact, despite wearing his hair over his socket like the other versions. 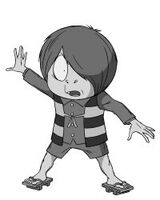 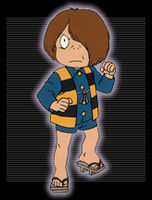 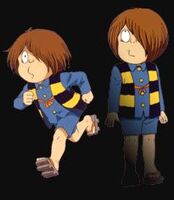 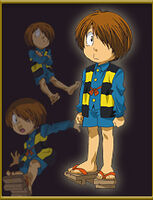 Kitarō in the Hakaba anime.

His birth year is 1954 in Hakaba Kitarō. In Kitarō's Night Tales, he was at the first grade of an elementary school in 1961.

Within GeGeGe no Kitarō series, it was implied that Kitarō could be older than his incarnation in Hakaba Kitarō.

Kitarō is the last descendant of the Ghost Tribe, which is a tribe of yōkai rather than literal ghosts. Although in the manga GeGeGe no Kitarō: Kitarō Jigoku Arc (and it's subsequent anime adaptation) he is said to be the son of a yōkai father and a human mother, this lineage has never been used another adaptation.

Kitarō's mother, Iwako died while she was still pregnant with him, and she and his father were buried by the blood banker Mizuki. But three days later, Kitarō crawls out of her womb and the grave by his own power. His birth story is usually not depicted in the anime series, with the exceptions of the 3rd,[4] 4th,[5] and Hakaba Kitarō anime.[6]

After his birth he was taken in by Mizuki, but Kitarō treated him coldly and ran away at age 6, leaving on an aimless journey with his reanimated father (see Medama-Oyaji), eventually settling into a peaceful life in GeGeGe Forest. As a child, he attended Yōkai Elementary with Neko-Musume. According to Nezumi-Otoko, Kitarō attended the Yōkai Study Hall with him. In the live-action movies he is said to have attended a semester at Under the Grave Middle School.

Kitarō usually lives together with Medama-Oyaji in a tree house commonly referred to as the GeGeGe House, although in the manga chapter Shinigami he lives in Sunakake-Babaa's Yōkai Apartments. Because he owns various Human World goods it seems he has money, but this is never made clear. He essentially lives a poor life, and in the original manga he is seen rummaging through garbage cans. In the serialized mangas and the animes, he doesn't usually receive a reward whenever he solves incidents, at most he will receive free food and bedding whenever he stays with someone. Some clients will offer him a large monetary reward, but he usually recommends they put that money towards hospital bills or, if such is the case, offerings to the Yōkai they disturbed.

The manga series Zoku GeGeGe no Kitarō depicts Kitarō's adolescence . In this series, welfare officer Mansuke suggests to him that "this is an era where yōkai and humans can co-exist". At Mansuke's advise, Kitarō integrates into human society and works various part-time jobs for income. At first he rooms with a poor painter, but the painter finds him annoying and kicks him out. He is then reunited with Nezumi-Otoko for the first time in 7 years and lives with him in a haunted house. Hiding his Ghost Tribe lineage, he poses as a human named Getakichi Tanaka (田中 ゲタ吉, Tanaka Getakichi) and attends Under the Grave High School. He also obtains a human girlfriend named Yuriko. This series also saw Kitarō taking part in seedier elements of human society, such as sex and greed. However, Shigeru Mizuki later felt "bringing sex to Kitarō was a mistake", and so in Shin GeGeGe no Kitarō Kitarō has abandoned his human life and moved to the mountains. By Ōbora Kitarō, Kitarō's adolescence had been retconned and he was depicted as a young boy again.