Kushami-no-Sei is a small yōkai with a round body that is entirely black, he has a pair of horns, arms with hands that have five digits each and legs with a pointy tipped feet. His eye has green sclera with a red iris while also lacking a visible pupil and a purple eyelids surrounding it. Across his body are small hair-like appendages, making him resembles the western yōkai Backbeard.

Kushami-no-Sei appeared in the third movie based on the third anime adaptation, GeGeGe no Kitarō: Saikyō Yōkai Gundan! Nippon Jōriku!! 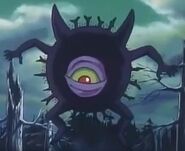 Retrieved from "https://gegegenokitaro.fandom.com/wiki/Kushami-no-Sei?oldid=67473"
Community content is available under CC-BY-SA unless otherwise noted.