GeGeGe no Kitarō Wiki
Register
Don't have an account?
Sign In
Advertisement
in: Article stubs, Males, Antagonists,
and 8 more

Kyūso (旧鼠 Kyūso, lit. Old Rat) is a rat yōkai, and an adversary of Kitarō. In the fifth series, he serves as a member of Nurarihyon's gang of villainous yōkai.

He appeared in Episode #103 of the fourth anime adaptation, Monster Rat! Yōkai Kyūso.

He first appeared in the eighth episode of the fifth anime adaptation, An Old Adversary! Nurarihyon. As part of Nurarihyon's plan to defeat Kitarō, he attacks the boy with a powerful poison. Kitarō is rendered almost helpless, and is forced to retreat. Using the last of his energy, Kitarō attacks Kyūso, Nurarihyon, and Kani-Bōzu using a powerful Internal Electricity attack, letting him escape.

Rat Transmutation: Kyūso is capable of turning others into rat-like beings and putting them under his control. He is able to do so by having a swarm of rats cover his victim, which then they disappear as they start growing features of a rat, such as a ears, whiskers and fur.[2]

Poison: In the 2007 anime, Kyūso can poison his foes by biting them. The poison is so powerful, that when Kitarō was bitten, his chanchanko was the only thing keeping the poison from entering his body.[1] 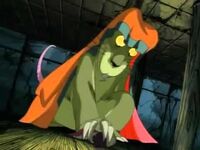 Kyūso as he appeared in the 1996 anime

The Kyūso of legend feeds on kittens. They are weak, but learn from their natural enemy (cats) and eventually bare their fangs as their hearts become warped.