GeGeGe no Kitarō Wiki
Register
Don't have an account?
Sign In
Advertisement
in: Article stubs, Characters, Females,
and 6 more
English

Masumi Asano
Miu (ミウ) is a human-like yōkai that appears in the 2007 anime. She is Kai's sister.

As a member of Amami Tribe, Miu possesses gills on her neck, azure-colored hairs, and a pair of tentacle-like hairs.

After her mother's death, she does not want to see anyone else get hurt or killed. She is kind and will help anyone within her reach.

She deeply respects Kitarō and has developed a feeling for him.

Miu received the Jigoku Key from her mother as she passed away. After Kitarō was on the verge of death after exhausting his spirit energy from overusing his Finger Guns, Miu passed on the Jigoku Key to him.

She appears in episode #32 of the fifth anime adaptation, Landing! The Threat of Western Yōkai.

Underwater Breathing: Miu is able to breathe normally underwater as she has gills on her neck.

Healing: Miu is able to heal others of their wounds.

Electrical Immunity: Miu is able to withstand electricity, being able to resist Kitarō's Internal Electricity, even after his Yōkai Power is enhanced by his Chanchanko.

As a member of Amami Tribe, she is a powerful yokai. Her featured abilities are telepathy, and combat capability, and delivers powerful blows in close combat. 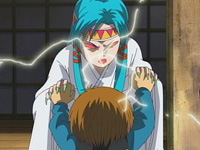 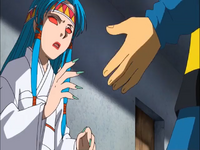 Miu's name is likely from "Ocean" in Japanese; as the kanji 海 can be read as "Umi". Where Miu's name in katakana can be rearranged to "Umi".