Neko-Musume (猫娘, ねこ娘 or ネコ娘 Cat Girl) is a cat hanyō and a member of the Kitarō Family. In nearly all adaptations, she has a romantic interest in Kitarō.

Out of every character of in the show, Neko-Musume has gone through the most change. Her regular attire consists of a long-sleeve white blouse, a pink dress with suspenders, pink shoes, and a pink bow in her hair. Her hair is usually in a bowl cut, and varies in color depending on which series.

In the second anime only, she instead wears a red one-piece dress with yellow polka dots and a white collar.

In GeGeGe no Kitarō: Yōkai Sen Monogatari, she wears a black gothic-lolita dress and has shoulder length hair, but in the second part her hair is changed to match her fifth anime cut.

The fifth and sixth anime series give Neko-Musume more human and feminine looks. In the fifth, her appearance is made to look cute, instead of looking slightly grotesque. She has larger yellow eyes and brownish orange hair. She wears a variety of different outfits, but mainly sticks to her iconic white blouse and red dress.

In the new sixth anime, Neko-Musume is taller than most of the other main characters, has the appearance of an attractive teenager, and wears a pair of red heels in place of simple shoes. Like in the fourth anime, she has purple hair tied in a bun with her bow. Starting with episode 27, aired in October 2018, she starts to wear sheer pantyhose under her shirt.(She donned them again in Episode 76 in October 2019). In episode 49, she takes on a child appearance that somewhat resembles her previous designs. In episode 51, Neko-Musume returns to her original appearance.

In most of her attractions her pink bow is set to project cat ears on her shade, highlighting her bake-neko nature. At the same time, in the sixth anime Neko-Musume's natural ears are pointed, and able to flop down when she feels extreme sadness. 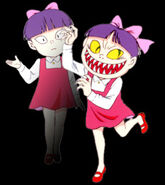 She normally appears human, but when she gets angry or sees fish or rats, her eyes turn gold and cat-like and she bares her fangs. Predictably, she does not get along well with Nezumi-Otoko. She harbors a crush on Kitarō, who sees her only as a friend in most adaptations.

In Mizuki Pro books she is officially classified as a half-yōkai, like Nezumi-Otoko, though this is rarely touched upon. In one instance, Kitarō told her that Nezumi-Otoko couldn't be trusted because he's half-yōkai, but Neko-Musume didn't show any offense to the comment. Also, in GeGeGe no Kitarō: Kunitori Monogatari she spoke ill of Nezumi-Otoko's breeding with comments like "he's tainted with human blood" and "he's not a real yōkai" and was once scolded by Nurikabe for her prejudice.

In the earliest anime adaptations (2 through 4), she would often have fan service moments such as panty shots, though in the 5th and Hakaba anime, which were produced after TV decency standards changed, these fan service cuts never happen. In the 5th anime, she is very fond of human fashion and is seen in different outfits and uniforms. In the 6th anime she's noticeably taller and less child-like in feature, gaining an adult, mature body with longer legs and more delicate features, along with red stiletto heels. She seems also able to control her transformations, gaining a more grotesque, cat-like face with a huge fanged mouth, yellow eyes and a flat nose upon going to battle. In this status, she's fully overtaken by cat instincts: despite being able to recognize friend from foe, she seldom speaks, howling and wailing ominously and charges on all fours, hitting and scratching furiously.

In the GeGeGe no Kitarō novel, Neko-Musume first meets Kitarō right after he leaves his foster home, when she comes across him chasing Nezumi-Otoko, whom had stolen his fish. She had heard of him beforehand from Sunakake-Babaa and notices his high power upon seeing him.

She is often the one to punish Nezumi-Otoko when he commits ill deeds, usually scratching him to shreds with her razor sharp claws. As a result, Nezumi-Otoko fears her and views her as his mortal enemy. However, they have been shown to work well as a team in battle.

Neko-Musume first appeared in the Shonen Magazine story Nezumi-Otoko and Neko-Musume, though a number of similar characters appeared before hand. In this first story, she did not wear her signature ribbon. In the Shonen Sunday version, Kitarō has a girlfriend named Nekoko whose face becomes cat-like when angered like Neko-Musume, though she is not a yōkai but a human with a strange disease. A Neko-Musume who wore a ribbon like in the 2nd and 3rd anime began to appear in the manga stories during the 80s. It could be said that the anime Neko-Musume was imported into the manga. It was also around this time that her profile began appearing in manga related guidebooks, where it was established that she attended the same yōkai primary school as Kitarō.

She appears in the Zoku GeGeGe no Kitarō story Neko-Musume. While Kitarō is attending high school, Neko-Musume is enrolled in the Bizarre Women's University's Strange Studies department. She now has whiskers on her cheeks like Nezumi-Otoko, wears an extravagant coat and has developed a fairly arrogant personality. This is also the first time she is shown working a part-time job and spending her income on Kitarō and Medama-Oyaji, which would later become standard for her in the 5th anime. She wants to live with Kitarō, so she plots to drive away Nezumi-Otoko. However, Nezumi-Otoko sets a trap for her and sucks her into a strange book. She isn't seen again during this series. However, she reappears in Shin GeGeGe no Kitarō as a student at Kitarō's alma mater Under the Grave High School. Her appearance is different from in Zoku, she now has her hair in braids with her bangs parted. This version of Neko-Musume is later seen in the GeGeGe no Kitarō Challenge Series story Secret of the Geoglyph. It has been suggested that these two versions of Neko-Musume are actually different characters.

Mizuki's pre-Kitarō story Kaiki Neko-Musume featured a Neko-Musume named Midori who had the same involuntary face-changing reaction to the smell of fish as the Kitarō Neko-Musume. Midori was cursed with this ability from birth because her father killed a giant black cat. In another parralel to the Kitarō franchise, Midori was also born in and crawled out of a grave like Kitarō.

A similar character appears in the original rental manga Hakaba Kitarō. Though she had a similar appearance and powers to Neko-Musume, she was a mostly different character.

Neko retains the abilities of Neko-Musume, but with less control than Neko-Musume: as the Kaiki Neko-Musume version she's actually a human being cursed into a bakeneko, who loathes her condition.