In the first anime, Neko-Sennin resembles an old man covered with long light-colored hair, excluding his face, and beard. He has eyes that have dark sclerae and small highlights, a pair of small nostrils and his mouth has sharp cat-like fangs. He wears a long light colored robe with baggy sleeves that conceals even his legs and carries around a staff tipped with a spiral-like head.

Within the third anime, Neko-Sennin still resembles an old man covered with white hair, where it now entirely covers his face, and he still retains a long beard. His eyes have dark purple sclerae with almost indistinguishable pupils. His outfit consists of a long green robe that reaches down to his ankles and has long sleeves.

In the fourth anime, Neko-Sennin now has more recognizable cat features, having light purple hair covering his body, a long beard and a pair of cat ears on the side of his head. His eyes have red sclerae with green irises and black pupils, a small brown nose lies above his cat-like mouth, that has sharp fangs and four pairs of whiskers. He wears a long white robe that has long baggy sleeves and usually conceals his legs, leaving his bare feet exposed.

Within the sixth anime, Neko-Sennin, resembles an old man covered with long white hair, mustache and beard. He has eyes that have black sclerae and small highlights and a pair of small nostrils that resemble his eyes. He wears a long pale green robe with baggy sleeves that reaches to his legs and carries around a wooden staff.

Neko-Sennin is typically portrayed as being a loving person towards cats, and being relentlessly vengeful to those who mistreat, abuse or abandon cats, going as far as to try to enforce the respective humans to live as pets, or even sentence them to execution.

He does, however, find room for forgiveness if they show repentance and caring towards their feline companions.

He appears in the story Neko-Sennin and in episode 17 of the first anime adaption, Neko-Sennin.

The Neko-Sennin is said to be a fairly powerful yōkai due to his advanced age, he is also fairly knowledgeable of multiple subjects. Elasticity: Neko-Sennin can alter his body to different degrees. The most common use of this ability is stretching his limbs to several meters long, he commonly does this with his arms to catch his foes.

Shapeshifting: He is able to make himself appear as a young anthropomorphic cat with dark purple fur.

Neko-Sennin is an ancient (1200 years old) yōkai sage who obtains immortality by transferring his soul (while he was alive) from cat to cat. The purpose of transferring his soul to every cat is to protect his frozen body that is laid in a tomb in a mountain called "Nekotsuka" from rats and bugs. 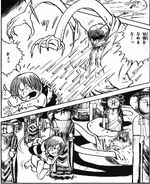 Neko-Sennin's powers in use in the 1968 anime 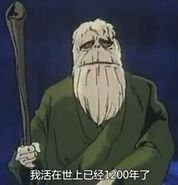 Neko-Sennin outfoxed by Kitarō in the 1996 anime

Neko-Sennin prepares to leave with his cat minions

Retrieved from "https://gegegenokitaro.fandom.com/wiki/Neko-Sennin?oldid=68278"
Community content is available under CC-BY-SA unless otherwise noted.