Nekoko (猫子 Nekoko) is a human girl cursed to transform into a Bake-Neko whenever she sees mice or fish. She is Kitarō's girlfriend in the Shonen Sunday run of the manga.

Although a major character in the "Sunday" run, she only ever made minor and cameo appearances in the anime adaptations.

Nekoko was essentially the prototype for the version of Neko-Musume who would begin showing up in the anime adaptations. Like Neko-Musume, she disliked Nezumi-Otoko and often punished him for his misdeeds.

In the 1971 anime, which was based on the Sunday run, Neko-Musume took her place in the stories she appeared in. However, she did make a non-speaking appearance as an ally in episode #19, Kamanari.

Nekoko makes a cameo appearance among the yōkai arriving for the sports festival in episode #40, Graveyard Night is for the Sports Festival!.

Nekoko made a small appearance in the 2018 anime as a fictional cartoon character being advertised on Mana's phone.[1] 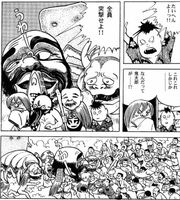 Nekoko in The Phantom Train Chapter 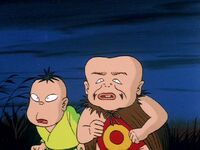 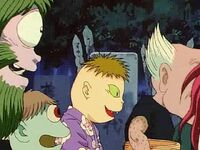 Retrieved from "https://gegegenokitaro.fandom.com/wiki/Nekoko?oldid=74572"
Community content is available under CC-BY-SA unless otherwise noted.