Obake Nighter (おばけナイター) is a GeGeGe no Kitarō story that first appeared as a chapter of the Shonen Magazine run. It has been adapted for the 1968, 1985, and 1996 anime versions of "GeGeGe no Kitarō".

NOTE: This section focuses on the original manga plot.

A young boy named Donpei finds a baseball bat in the middle of a cemetery. Though he sees a name, Kitarō, written on it, he thinks nothing of it and takes the bat home. He uses it in a baseball game and hits nothing but home runs. When his teammates question him about his sudden skill, he realizes it must be the bat. His team uses the bat to win every game and soon becomes so famous that even major league teams from America are interested in them. One night Kitarō arrives in Donpei's room looking for his bat. Donpei says he'd rather die than give up the bat, so Medama-Oyaji comes up with an idea: Donpei can keep the bat if he and his team can beat Kitarō's Yōkai team in a night game in the cemetery. But if his team loses, they all must go to Hell. The team agrees, confident that the bat will get them through the game. On the night of the game, however, they learn that Kitarō's team possesses a baseball that will always avoid the special bat. When Donpei's team complains that the Yōkai team is cheating, Kitarō agrees to give up the ball if they give up the bat. Donpei's team reluctantly agrees and thee special bat and ball are fed to Hyakume, the game's umpire. The playing field is evened only momentarily though, as even when Donpei's team hits the ball, the gigantic Mammoth-Otoko easily catches. Just as everything seems hopeless, the sun comes up and the Yōkai team retreats from the light. Kitarō decides to call it a draw and let's the kids keep their lives, though he'll still be taking the bat. 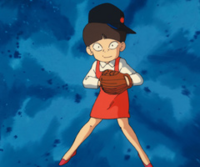 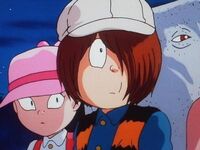 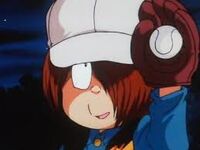