GeGeGe no Kitarō Wiki
Register
Don't have an account?
Sign In
Advertisement
in: Article stubs, Characters, Males,
and 13 more

Odoro-Odoro are masters of disguise. When not disguised, they appear to be a type of four-legged beast with a wild mane. They also have claws and tusks.Its face somewhat resembles a Hannya.

Within the sixth anime, Shōgo's personality is mostly suppressed by the Odoro-Odoro's. In this state he behaves similar to that of a beast and mainly acts on instinct. Because of this his mindset is rather narrow and is driven to consume human blood. Shōgo describes that in this mental state he becomes a monster who only ever thinks about fresh blood, preventing him from committing suicide. However Shōgo is able to, albeit faintly, control his actions while in this state, originally fleeing once his daughter tried to stop Kitarō and though later giving in to drink her blood, had a look of remorse, begging to be stopped.

In the year 1683, under orders of Tarōbō, Otoroshi fell from atop a shrine gate and crushed several people in Edo.[1]

He appears in episode #27 of the first anime adaptation, Odoro-Odoro.

He appears in episode #37 of the third anime adaptation, Yōkai Odoro-Odoro.

He appears in episode #38 of the fourth anime adaptation, Blood Fight! Odoro-Odoro.

He appears in episode #21 of the fifth anime adaptation, Madly in Love? Yōkai's Love Story.

He appears in episode #43 of the sixth anime adaptation, Eternel Life: Odoro-Odoro. 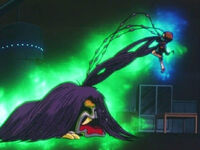 Odoro-Odoro in Japanese folklore is also known as Otoroshi (おとろし, Otoroshi). In the legends, Otoroshi is a guardian of scared places such as shrines and temples and will frighten insolent people with impieties. Within his appearance in NonNonBa and Me, it was described to be loyal to the original legends of Otoroshi as a guardian beast of holy places. 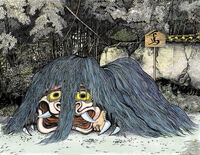