GeGeGe no Kitarō Wiki
Register
Don't have an account?
Sign In
Advertisement
in: Article stubs, Characters, Females,
and 10 more

Orochi-Onna (大蛇女, serpent woman) is a yōkai born from a broken fang of the Yato-no-Kami and is a loyal minion of the serpentine god. She appears in the 2008 film "GeGeGe no Kitarō: Nippon Bakuretsu!!", where she poses as Maya Hibino (日比野マヤ, Hibino Maya), a human school teacher and the object of Nezumi-Otoko’s affections.

Orochi-Onna's true form is an anthropomorphic serpent, with pale green scales, dark grey underside, a pair of slender arms and a rattle at the end of her long tail. Her face has a horn on her forehead, her eyes have yellow sclerae with narrow black pupils, a snout with a pink forked tongue and long wavy red hair. She also has a rather curvaceous figure, with pair of large breasts and unusually, a slit around her midsection that resembles a pair of legs.

Aside from Nezumi-Otoko became fascinated with Maya Hibino, Orochi-Onna also became fond of Nezumi-Otoko, as she felt the similar loneliness and hardships both went through by living through tremendous amount of times in human worlds, and tends to pull him within her coiling.

When she sacrificed herself, her despair was not only because of her duty and fate, but also by losing Nezumi-Otoko's affection.

When Enma-Daiō defeated Yato-no-Kami in ancient time, one of snake god's fangs was broken off, and turned into Orochi-Onna.

Skin Shedding: Being a snake, Orochi-Onna is able to shed her skin instantly even with her hair.

Human Transformation: Orochi-Onna is capable of transforming into a human form, under the name Maya Hibino.

Enhanced Flexibility: Orochi-Onna is very flexible, being able to wrap and coil her snake body around a target to restrain them. 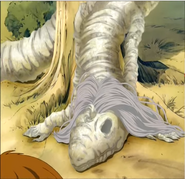