GeGeGe no Kitarō Wiki
Register
Don't have an account?
Sign In
Advertisement
in: Article stubs, Characters, Males,
and 11 more
English

Pii (ピー Pii), also known as Vampire Pii (吸血鬼ピー Kyūketsuki Pii), is a vampire and antagonist of Kitarō. He is always accompanied by his familiar, Monroe. He first appeared in the Shonen Sunday story The Phantom Train.

In the manga, Pii's appearance is rather chimerical, composing of a reptilian snout with prominent fangs, the bottom pair in front of the top pair, reptilian legs with three claws, and a tail ending with a left hand. His body has a light-colored spot pattern with dark skin, while his face light skin and small bumps across his face. He has a pair of small horns that rest between his eyes and snout and another horn on top of his head. He has a wild, dark-colored and his eyes have light-colored sclerae with big pupils, beside them are tufts of crests. His legs and hand are light-colored and are tipped with claws at the end of his toes and fingers. He wears a dark top hat with a light band and a pair of dark-colored boots.[1]

Within the 1971 anime, Pii's face has light blue skin and small bumps from his forehead to his lips while his body has green skin and a cross net pattern with a line of small light blue bumps, ending with a right hand. He has a wild mane that is colored bright green and his eyes have white sclerae and big black pupils, as well as having tufts of green crests by the sides. Between his eyes are a pair of small white horns and a larger one on top of his head. He has claws at the end of his toes and his hand is tipped with teal claws. He wears a red top hat with a light pink band and a pair of red boots.[2]

In the 1985 anime, Pii's skin is purple with green spots and his fangs poke out from his mouth. His legs and left-hand end with yellow claws and have pale gold skin. His hair is dark blue, whereas his eyes have yellow sclerae with black pupils and the crests around them are pink. Near his eyes are a small pair of red horns and another, slightly larger pair, sits atop his head. He wears a black top hat with a black band and matching shoes.[3]

Within the 1996 anime, Pii's skin on his head is green with small bumps, his body has purple skin with gold spots, and his legs and left-hand are dark tan. He has a wild yellow mane around his neck, his eyes have red sclerae and big black pupils and the crests are now wavier and are black. On the top of his head is a white horn that curves forward. His feet have three toes facing forward and a fourth facing behind, each having a black claw and his top hat is black with a pink band and is barefoot.[4]

In the 2007 anime, Pii has green skin with orange bumps, his left hand is completely green, and has long red nails. His hair is long and blond, his eyes have yellow sclerae with orange irises and black pupils and his lips are red. The crests around his eyes are red and he has two small white horns on the top of his head in addition to the pair that rest between his eyes and the snout. His top hat is pink with a white band and his boots are red with short heels.[5] Pii's feet consist of three toes facing forward and one toe facing behind, each tipped with a red claw.[6]

Within the 2018 anime, Pii has green skin with orange spots, his left hand and legs are pink with yellow claws. He has a wild yellow mane around his neck and his eyes have red sclerae with big black pupils. His crests are noticeably wavy and match his skin, he has two small horns on the top of his head in addition to the light green pair that rest between his eyes and the snout. His feet have three toes facing forward and are barefoot. While not wearing it, his silk hat is red with a white band.[7]

Appearance in the 1971 anime 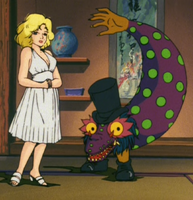 Appearance in the 2018 anime

Pii appeared along with Monroe in the Shonen Sunday story, The Phantom Train.[1]

Pii appeared along with Monroe in episode #25 of the second anime adaptation, The Phantom Train.[2]

Pii appeared along with Monroe in episode #61 of the third anime adaptation, The Phantom Train.[3]

Monroe appeared along with Pii in episode #9 of the fourth anime adaptation, Roar! Kitaro Train.[4]

Pii appeared along with Monroe in episode #43 of the fifth anime adaptation, Mysterious Yōkai Train.[5]

After their defeat, they showed up again at the GeGeGe House in episode #54, Vampire Elite. However, they could not provide help as Johnny is above them in terms of power. As the Vampire Elite's song started to play outside, they are frightened and quickly run away.[6]

Pii appeared along with Monroe in episode #93 of the sixth anime adaptation, The Phantom Train.[7]

Bloodsucking (吸血 Kyūketsu): As a vampire, Pii becomes stronger by drinking blood and his ability to convert others into vampires requires her to bite their necks and drain some blood.[3]

Vampire Conversion: Pii is able to turn his victims into vampires under his command, either by the use of his hat or by biting them.[3]

Silk Hat: Pii's hat is made of his ancestors' blood, when someone other than him wears it they become a vampire under his command.[7]