Mizuki and his father

Mizuki with his parents and little brother (circa 1943)

Mizuki as a character in one of his manga

Mizuki with manga legend Osamu Tezuka in a publicity photo

Mizuki on the set of the Akuma-kun TV drama

The grave of Shigeru Mizuki
Add a photo to this gallery

Mizuki with Kitarō and Medama-Oyaji

with Kitarō and Medama-Oyaji (close-up) 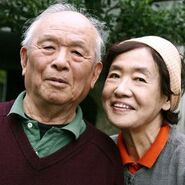 Mizuki as an occult librarian in the 1985 anime

Mizuki in the final scene of the 1985 anime 4th movie

Mizuki under the influence of Guwagoze in the 1996 anime

Mizuki in awe of the giant bird taking it's step in the Hakaba Kitarō anime, ep. 11
Add a photo to this gallery

Back to Main Article
Retrieved from "https://gegegenokitaro.fandom.com/wiki/Shigeru_Mizuki/Gallery?oldid=35520"
Community content is available under CC-BY-SA unless otherwise noted.