Shigeru Mizuki Road (水木しげるロード, Mizuki Shigeru Rōdo) is a shopping center in Sakaiminato, Tottori, Japan. It is a tourist attraction that features many statues and sculptures of characters from Shigeru Mizuki's manga series GeGeGe no Kitarō. Many of the shops and facilities are themed after the series as well. 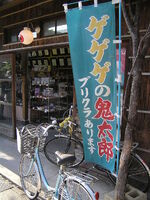 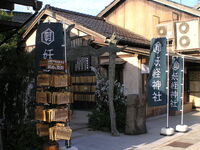 In the episode 17 of the 2018 series an animated version of the Shigeru Mizuki Road appears in the rural town of Sakaiminato, in this version hometown of Mana Inuyama's parents. It features mostly statues similar to the real life one (save for a Neko-Musume more similar to the revamped version and a scared-looking Nezumi-Otoko) and a different origin: instead of an homage to Shigeru Mizuki, the Yōkai Road in Sakaiminato is described as the last homage to Kani-Bōzu, a crab yōkai wishing to be defeated and turned into a bronze statue, forever guarding the grave of a human princess he used to care for in ancient times.

While forced to grant his wish and defeat him, Kitarō, his friends and the inhabitants of Sakaiminato had several bronze statues of yōkai casted and scattered in the same road, hoping to make Kani-Bōzu's fate less lonely and hopeless.