In the fifth anime, Suiko takes the form of a kappa-like creature made of dull green water with a dull blue undertone. His head has pointy ears and is topped with a white plate, surrounded by long, moss green hair. While his face has a prominent snout, sharp white teeth and red pupilless eyes. He has webbed hands and feet, the former having claws, bumps appear over his thigh area and his dark blue shell has blue marginal scutes and matching bumps spread across it.

The Suiko behaves like that of a beast, communicating only in growls and roars. After being awakened it goes after those who disturbed its resting place, hunting them one by one. It will go after its targets if they are near water and even if one manages to escape, will pursue them later on.[1]

He appears in episode #14 of the first anime adaptation, Suiko.[2]

He appears in episode #9 of the third anime adaptation, Immortal Yōkai Suiko.[3]

He appears in episode #56 of the fourth anime adaptation, Water Transformation! Yōkai Suiko.[4]

He appears in the first episode of the fifth anime adaptation, The Street Where Yōkai Dwell. A Suiko was sealed in a stone stand by a lake. One day it is awakened when a group of boys disturb the stone stand it rested in. Angered it goes after the boys, starting with Aoki who was bathing that night, leaving algae behind. The next day it captures Akai in a park's restroom, flooding it and once more leaves algae. He goes after Shiraishi the next day, pulling him into the gutter of an alley, but is stopped by Kitarō with his Hair Needles and pulls the Yōkai boy instead. It escapes after Kitarō uses his Internal Electricity on it. It later swallows Kuroda at the same park restroom.

It goes through the sewers to an elementary school pool, revealing itself and chasing after Shiraishi to the roof. He is hit with Kitarō's getas and is told that it has no means of escape, making it reveal its true form. It charges towards the Yōkai boy but its covered by his Chanchanko. It is then held down by Konaki-Jijii and is covered in Sunakake-Babaa's sand, bringing it pain and weakening him. Just as they are about to seal the water Yōkai it begins to rain, empowering it. It sprouts water tendrils from its body and grabs onto them. The floor breaks because of its weight, causing it to crash down through the other floors. It tries to pierce through Kitarō's Chanchanko as it covers the roof and swallows the Yōkai boy. Because of the dragon essence mixed in the sand Kitarō's Internal Electricity is more effective, the moisture evaporates and the Suiko's power is lost once more becoming a small ball. They gather around the ball as Medama-Oyaji puts the seal on it. Kitarō holds it as he tells the boys to fix the stand and place it back there. The next day the ball containing the Suiko sits in the stand once more as the boys clean it.[1]

A Suiko appears in the 35th episode of the sixth anime adaptation, The Witches of Destiny. He is among the crowd gathered around the GeGeGe House, trying to drive Agnès out of the forest. He listens to Medama-Oyaji as he warns them that if they drive her out then the tragedy Malay Yōkai will only repeat elsewhere. Soon followed by Kitarō as he explains how grave the consequences are if Japan becomes a part of Backbeard's empire, causing the crowd to look at one another. Until their attention is drawn to Kitarō as he stands on his resolve to fight.[5]

Another Suiko appears in The Heart's Darkness the Suiko Reflects.[5]

Water Body: The Suiko's body is made of water, thus is able to live anywhere so long as there is water. It is able to change its shape into an amorphous mass of water and grow tendrils to grab its target. The Suiko is also capable of absorbing people into itself. Its power grows from the amount of water it has, becoming stronger the more it absorbs. Water absorbents can counter this and it is harmed by electricity.[1] In the 2018 anime, as he is completely made of water, all physical assaults are ineffective. However if he comes in contact with a coolant, then his body will start to freeze.[5]

Suiko in the 1985 anime, closer to his manga appearance 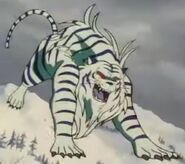 Suiko in the 2007 anime, closer in appearance to the legend 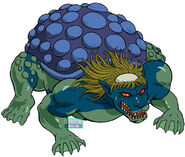 A different Suiko in the crowd of yokai in the 2018 anime, closer to his manga appearance

The Suiko is a kappa-like yokai that lives in and around the Chikugo River (Kyushu), Lake Biwa (Shiga prefecture), and other bodies of water across Japan. It can also be found in China. However, the suiko is a different beast altogether and must not be confused with the kappa.

In addition to prowling around at night and making mischief, the suiko has the power to possess people. Those possessed by a suiko descend into a temporary state of madness, but they recover quickly after the creature withdraws.

At least once a year, the suiko drags a human victim into the water, sucks out his blood, and returns the body to shore. It is best not to have a funeral for the victim of a suiko attack. Instead, the body should be left on a wooden plank inside a small thatched hut in a field. If done properly, this course of action causes the flesh of the suiko perpetrator to slowly rot until it dies.

Retrieved from "https://gegegenokitaro.fandom.com/wiki/Suiko?oldid=63120"
Community content is available under CC-BY-SA unless otherwise noted.