Sunakake-Babaa (砂かけ婆 or 砂かけばばあ Sand-throwing Hag) is an old yōkai woman and a member of the Kitarō Family. She serves as an adviser to Kitarō and his companions and also manages the Yōkai Apartment.

Sunakake-Babaa resembles an old woman with large eyes and wearing a kimono. She has long hair with a single long lock of her bangs between her eyes. She appears to have specks of sand all over her face and eyes.

In the third and fourth anime adaptations, Sunakake-Babaa's appearance centuries ago was noted to be a young lady.

According to Amabie, who once got up in her face, her skin feels rough.

Sunakake-Babaa's various designs in the 1968 anime. 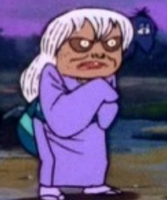 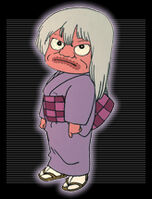 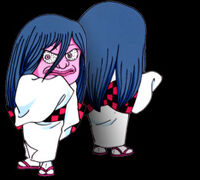 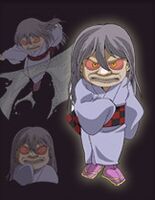 Sunakake in her youth in the 1996 Anime

Sunakake-Babaa first appeared in a cameo in the rental manga story A Walk to Hell and made her official debut in the Shonen Magazine story The Great Yōkai War. Her first appearance in the 1st anime was in Ep. 7, though her appearance is quite different. In both the manga and anime version of The Great Yōkai War, she dies during the battle with the Western yōkai. In the manga version her cause of death is unknown, but her corpse is seen after she was lead to the enemy lair by the Witch. In the anime version she is killed by the Dracula. She later reappears without any explanation as to how she was revived (Ep. 24) and became a recurring character.

Sunakake-Babaa is one of Kitarō's main allies and also acts as a guardian to him alongside Medama-Oyaji. By the 3rd anime she is said to be 2800 years old, though in Ep. 107 her age is given as 1200. She claims to have gone along on Empress Jingu's invasion of Korea in the 3rd century. The live action films also establish her as several centuries old.

Her fighting tactics include throwing sand, often mixed with special ingredients to give it certain effects. She also possesses a powerful slap. She is also quite skilled at potions, medicine and soothsaying. In the story Kamanari, she has the ability to recieve telepathic messages from Medama-Oyaji by extending her hair like an antenna.

Although she can be grouchy and quick-tempered, at heart she is a kind soul who is revered by the younger yōkai. Her sense of justice is strong and she will act without regard for her own safety to save others. Although a yōkai on the side of justice, she is not very fond of humans and will often speak ill of them. There are several episodes where she harshly describes humans as greedy and dangerous, such as Akuma Bael (2nd anime, Ep. 33) and The Yōkai Yokochō Cruise to Hell (5th anime, Ep. 34). However, she has been shown to act kindly to human children, such as in Kitarō's World Obake Tour and the live-action films.

She is usually hard at work studying black magic and potions while also managing the Yōkai Apartment. Several yōkai live in the apartment, such as Konaki-Jijii, and during the Shonen Sunday run most of the main cast lives there, including Kitarō and Medama-Oyaji. She also allows yōkai who have lost their homes to stay at the apartment. Because she is very tight with money, she can be merciless when it comes to collecting rent. The rent is not cheap, but she is willing to work out deals in exchange for rent, such as 5 years worth of Iriomote star sand from Kawauso or any umbrellas she likes from Kasa-Bake's collection for 3 years. Yobuko is allowed to work off his rent by doing odd jobs for her. She is also lenient toward yōkai who are working but make little income. In the 5th anime, she instead runs an apartment on Yōkai Yokochō.

Because she has lived since ancient times, she gets along best with elderly yōkai such as Medama-Oyaji and Konaki-Jijii. She is particularly close to Konaki-Jijii and they are often seen together, leading to fan speculation that they are a couple or maybe even married. During the real world yōkai pop culture boom (started by the Kitarō series itself), she and Konaki-Jijii spent some time performing as a comedy duo on TV. In the 5th anime, she acts as a sub-leader to the main cast beneath Medama-Oyaji. In the 4th anime, she possesses an old-fashioned type of yōkai pride, declaring in Ep. 62 that "if yōkai were ever to drive cars, the world would end".

Sunakake-Babaa has at least 2 distant relatives, the Central Asian sand yōkai Ekiseru (Kitarō's World Obake Tour) and the German Sandman (Saishinban GeGeGe no Kitarō), though both of them appeared as antagonists against Kitarō. She did not appear during Sandman's story.

A yōkai who appears frequently in Nara and Hyogo. She hides in the woods near Shinto shrines and throws sand to scare off passersby. It is said she has no visible form.

According to one reader from Kyoto, she is mostly seen in the Kinki Region. According to her letter, she was walking home from the shrine when a cloud of sand rose up from a bush. She braved forward and used a bamboo stick to peek into the bush. She asked "where is this sand coming from", but no one was around and there was no reply.

Suddenly, she saw a single stone lying about a meter away from her. "There was no way a stone threw sand, so for the first time in my life I was spooked" she added. Her story was a specific case, but it was definitely the work of Sunakake-Babaa.

In this day and age where yōkai rarely appear, this would indeed be a special experience for anyone.