Japan
Tengu (天狗 Tengu) are a class of yōkai to which many characters of the GeGeGe no Kitarō franchise belong.

Many of the Tengu have humanoid figures, known primarily to have red skin and a long nose. Most can be seen wearing priests' robes, and some may carry fans with them. Depending on the type of Tengu, they may have a combination of both human and avian attributes, such as beaks or wings.

Yǔmin in the second opening of the fifth anime. 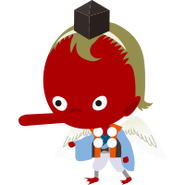 A Tengu in GeGeGe no Kitarō: Yōkai Yokochō

Most Tengu (天狗, lit. "Heaven Dog") fall under the following categories: The Karasu-Tengu, and the Yamabushi-Tengu.[1] The original depiction of the Tengu heavily resembles what we now know to be the Karasu-Tengu. Instead of red skin and long noses, they were portrayed with beaks and wings. They were ferocious, often attacking anyone who entered the forests they inhabited. Over time, the portrayal of the Tengu began to change, and the Yamabushi-Tengu became the most popular depiction. The Yamabushi-Tengu have red skin, long noses, and wear the robes of Buddhist priests. They're associated with Dharma (Buddhist Law), and are seen as tricksters. Folklore states that corrupt and sinful priests will turn into the long-nosed Yamabushi-Tengu after their passing.[2]