In the fourth anime, Umi-Oshō appears as a turtle with a long neck and the head of a bald man. His vibrant green carapace has a hexagonal pattern, his scales on his short fins are dull green and his underside light green. He has pale skin on his neck and head. He has a pair of ears on the side of his head and his eyes have yellow sclerae with green irises.[1]

He appears in episode 76 of the third anime adaptation, The Man-Eating Island and Umi-Oshō.[2]

He appears in episode 77 of the fourth anime adaptation, Umi-Oshō and Funa-Yūrei!.[1] 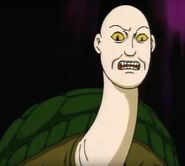 Retrieved from "https://gegegenokitaro.fandom.com/wiki/Umi-Osh%C5%8D?oldid=67599"
Community content is available under CC-BY-SA unless otherwise noted.