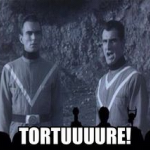 Also, a while back I tried to write a list of my top 100 favorite Manga & anime characters. Although I scrapped the idea, in the end Nezumi-Otoko was battling for 1st place with Ataru from Urusei Yatsura, Luffy from One Piece, and Kinnikuman from Kinnikuman. I just love that filthy rat!!

These are the voices I hear when I read the manga stories. The actor's voices I mean, not the ones telling me to kill my parents.

To added back to Shigeru Mizuki page later

Mizuki had initially planned to return to New Guinea; however, the Occupation of Japan changed that. His injuries and loss of his writing arm did little to help, nor did the fact that his older brother, an artillery officer, was convicted as a war criminal for having prisoners of war executed. As a southpaw, after the war he taught himself to write and draw with his right hand.

Since then, he has published numerous works, both on yōkai and military works. He has also written many books on both subjects, including an autobiography about his time on New Britain Island and a manga biography on Adolf Hitler. In 1991, he released a short work titled War and Japan published in The Sixth Grader, a popular edutainment magazine for young people, detailing the atrocities committed by the Japanese Army during their rampage in China and Korea and is narrated by Nezumi-Otoko.[2] The work serves as a powerful counterpoint to revisionist manga like the works of Yoshinori Kobayashi and by extension a way for Mizuki to express his anger at those responsible for all of Japan's victims. When not working in either field, he paints a number of subjects, though these works are not as well-known as his literary ones which have made him a household name.

In 2003, he returned to Rabaul to rekindle his friendship with the natives, who had named a road after him in his honor.

In 2005, Shigeru Mizuki appeared in a cameo role in The Great Yōkai War, directed by Takashi Miike, a film about yōkai inspired by his work; several of his characters make cameo appearances. A brief explanation about his works also is mentioned in the film.

In 2010 NHK broadcasted an asadora about his married life, GeGeGe no Nyōbō, based on his wife Nunoe's autobiography.

Retrieved from "https://gegegenokitaro.fandom.com/wiki/User:Idol_Choujin_Showtime?oldid=41641"
Community content is available under CC-BY-SA unless otherwise noted.