GeGeGe no Kitarō Wiki
Register
Don't have an account?
Sign In
Advertisement
in: Characters, Males, Yōkai,
and 7 more

Jiangshi Conversion: Xiangtian can emit green energy waves from his hands and legs and convert others into Jiangshi, where they become servants under his command.[1]

Fire Breath:Xingtian is capable of breathing out blasts of fire.[1]

Immortality: He can be revived so long as the seal of China Daoshi remains lifted, where his body recovers from a mummified state.[1] 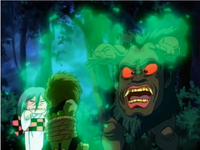 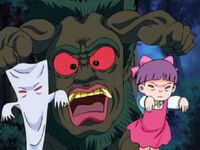 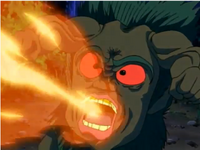 Xingtian is a Chinese deity who fought against the Supreme Divinity, where he lost and was beheaded. His head was then buried in Changyang Mountain. Despite this, the now headless deity continues to fight, wielding a battle axe and shield and his torso growing a face, where his nipples became his eyes and his navel became his mouth.