View source
watch 01:36
We're Getting Mutants in the MCU - The Loop
Do you like this video?
Play Sound

Various
The Yōkai Ocarina (妖怪オカリナ Yōkai Okarina) is an all-purpose tool used by Kitarō in the third and fourth anime. It is an ocarina that can summon yōkai or be used as a weapon. In Edo period, he used a flute instead.

The Yōkai Ocarina is similar to the Solomon Flute from Shigeru Mizuki's other series, Akuma-kun, and was recycled into the third Kitarō anime. In the instruction manual for the game GeGeGe no Kitarō: Yōkai Gundan Chōsen, it is listed along with the chanchanko and the remote control geta as one of the "Three Sacred Ancestral Weapons". The Monday Dramaland TV movie featured a Kitarō Flute, but this flute was for summoning Kitarō and was not used as a weapon. The same sound from the Kitarō Flute was used for the Solomon Flute in the 1987 TV movie.

The ocarina is light blue in the third anime, while in the fourth anime it is white, and was red by Shigeru Mizuki's works. In the short GeGeGe Festival! The Five Kitarō, which played before the 5th series film GeGeGe no Kitarō: Nippon Bakuretsu!! and featured the Kitarō from each anime adaptation up to that point, the third and fourth Kitarō are shown playing their ocarinas during the celebration.

Kitarō can play a specific tone on the ocarina that will summon his yōkai allies to arrive and help him. It can also be used to summon insects and crows. The sound of the ocarina is different in the two anime. This function is first used in the first episode of the third anime, and in that same series Medama-Oyaji will often prompt Kitarō to use it with the line "Kitarō, call an ally!". This function is used far less frequently in the fourth anime, and when it is it takes far longer for allies to arrive. In Ep. 97, Kitarō uses its tune to cancel out the tune of Grimalkin's flute she used to control the Golem.

A long whip can come out of the ocarina's duct which Kitarō can use as rope or attack enemies. It is quite sturdy and considerably long, although not limitless. By wrapping it around power lines, he can charge it electrically. This function is used quite often in the fourth anime. It was first used in Ep. 12 of the third anime. In 1985 anime, this whip was also seen to create a wind vortex to blow away Amefuri-Kozō's rainclouds.

A blade and a stick can also extend from the ocarina's duct. The blade appears to double as a simple staff, and Kitarō can seemingly switch between the two weapons. He can also store energy or electricity in it. The staff can also be used as a lever or for pole vaulting, and can even blow out air. This function first appeared in Ep. 2 of the third anime. The blade function was never used in the fourth anime, although the staff was used. He can also extend it into a pole and jump high with it in a manner similar to that of a pole vault.

When Kitarō plays certain songs on the ocarina, they have a harmful effect on some yōkai.

The Ocarina used as a sword.

The Ocarina used as a rope. 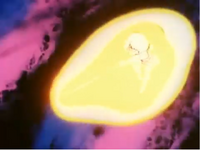 Ocarina as a jumping pole 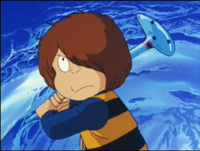 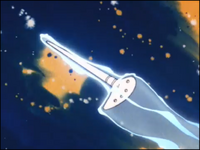 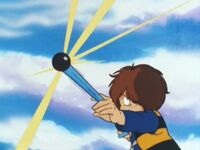 Ocarina as a cue stick 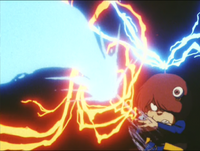 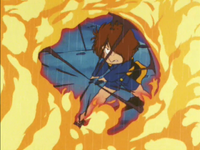 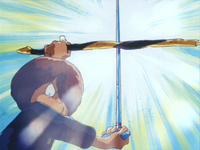 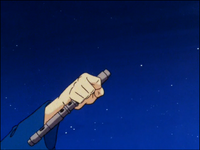 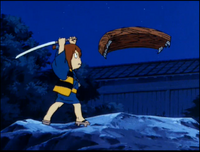 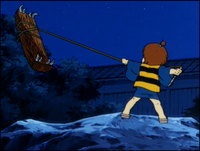