In the manga, Yasha appears as a mass of living, light-colored hair. He has a pair of large, slit-shaped eyes with pupils that curl outward.

In the first anime, Yasha is a mass of living, light-colored hair that parts at the middle, with many strands forming tentacles. His eyes have dark-colored sclerae with outward curling pupils that matches his body.

Within the third anime, Yasha is a living mass of dark-blue hair, parting in the middle. His slit-shaped eyes have yellow sclerae with dark-blue pupils that are shaped like crescent moons, facing in opposite directions.

In the fourth anime, Yasha is made of a mass of blue hair that parts between his eyes. He has glowing green sclerae with slit shaped pupils that match the color of his body.

Within the fifth anime, Yasha is made of green hair, parting in the middle with several strands sticking out. His eyes are shaped like sideways raindrops, having black sclerae and yellow pupils that are shaped like spiked circles.

In the sixth anime, Yasha is large mass of white hair, parting in the middle. His eyes have navy sclerae, that usually glows bright red, and matching pupils that curl inward.

Within the Hakaba anime, Yasha is a giant mass of living, vine-like hair that is colored green. His eyes have glowing yellow sclerae with dark-green pupils that are shaped like opposing crescent moons.

Yasha in the live-action film series has his own human-like appearance.

Yasha first appears in the rental manga story The Boarding House. 1,000 years ago he came to Japan from China, but sometime after arriving he was buried in a grave. In 1960, a scientist named Bon Arima finds his grave after searching for 50 years. Arima dug the grave with his bare fingers in the rain and was bitten to death by wild rats. Arima's blood, mixed with the rain, revives Yasha. Before long, he steals Kitarō's soul and uses him to lure victims. Playing Yasha's hypnotic tune on a violin, Kitarō unwillingly and unknowingly tricks several people to their deaths. After Yasha exposes himself during a live TV performance, he and Kitarō move out to the country and take over an inn, awaiting victims to fatten up before Yasha feasts on them. While Yasha is working on his latest victim, penniless manga artist Nashita Kaneno, the vampire Dracula IV checks into the inn and sets his eyes on Kaneno as well. The two vampires eventually battle over Kaneno, killing each other in the process after Yasha envelops Dracula IV in a giant hairball.[1] Nezumi-Otoko, who was working for Dracula IV, buries the hairball and eventually a Vampire Tree sprout grows.[2]

In the Shonen Magazine series story Yasha, Yasha eats souls instead of drinking blood and lures his victims with a hypnotic guitar. He also possesses a hollow, human-like host body which he rests on top of. After stealing the soul of a boy named Shota, Kitarō is hired to find the culprit, but Yasha hypnotizes him with his guitar and steals his soul. Medama-Oyaji eventually finds Yasha's hideout and frees Kitarō's soul, but before he can free Shota's Yasha captures and swallows him. Later, as Yasha tries to lure a young girl with his guitar, Medama-Oyaji pops out of his nostril and ears to scare her away. Yasha returns to his hideout and tries to eat Shota's soul but is attacked by the now freed Kitarō. After a brief scuffle, the host body is knocked out. Yasha's true form then attacks Kitarō but is burnt alive when Medama-Oyaji lights him with a match[5].

In Saishinban GeGeGe no Kitarō, he is one the many yōkai revived by the Yōkai Incense. He and Odoro-Odoro bump into each other while attacking Kitarō and become entangled[6]. Yasha's niece, Yasha-Hime, appears later in the series[7]

He appears in the second episode of the first anime adaptation, Yasha.

He appears in the tenth episode of the third anime adaptation, Devil's Melody: Yasha.

He appears in the third episode of the fourth anime adaptation, Guitar of Horror! Yasha

Yasha appears in the third episode of the fifth anime adaptation, The Mysterious Melody! Yasha.

Yasha appears in the second episode of the Hakaba Kitarō anime, Yasha vs. Dracula IV. The story follows the rental manga pretty closely with only small changes. Yasha sucks Arima's blood while he is still alive, Hageyama replaces Kaneno and the subplot of Kitarō becoming a famous violinist is omitted.[8] 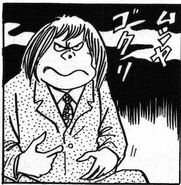 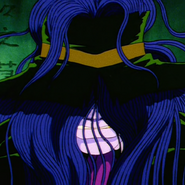 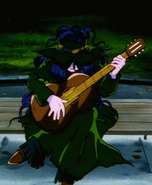 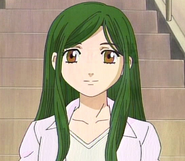 Yasha in the second live-action film

Yasha in the 2018 anime.
Add a photo to this gallery

Retrieved from "https://gegegenokitaro.fandom.com/wiki/Yasha?oldid=63499"
Community content is available under CC-BY-SA unless otherwise noted.