GeGeGe no Kitarō Wiki
Register
Don't have an account?
Sign In
Advertisement
in: Article stubs, Characters, Males,
and 13 more

In the manga and the 1996 anime, Yuki-Otoko largely resembles Namahage but with a more slender, taller build.

In the 1985 anime, the Yuki-Otoko seen at the end of the GeGeGe no Kitarō: Saikyō Yōkai Gundan! Nippon Jōriku!! has grey hair instead of yellow hair in the previous episode.

Yuki-Otoko in the 1996 anime was extremely hostile towards whoever he considered foes, but despite harshness towards Kitarō, his family's attacks on humans were to save wildlife from poaching.

Ice Giant (冷凍巨人 Reitō Kyojin): In 1968 and 1985 anime, Yuki-Otoko and his family were able to merge into an ice giant after they were melted. 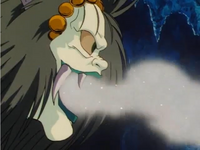 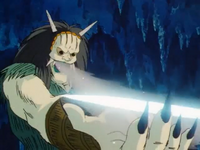 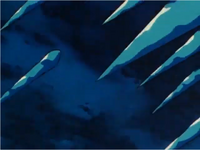 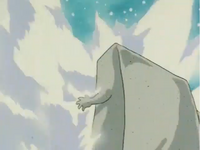 The term Yuki-Otoko refers to a sasquatch cryptid of Japan. Because they live in the cold mountains, they are considered a variation of the Yeti. This Yuki-Otoko however, has elements of an Oni in his design, having horns, messy hair, a fanged-mouth, and straw clothing.